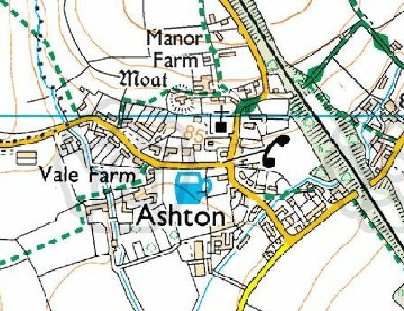 , a few yards from the border of Buckinghamshire and close to the banks of the river Tove. The highest is one of 426 feet, at the cross-roads in Salcey Forest which forms the eastern corner of the parish. Ashton parish is approximately 3 miles at its longest, from Stoke Bottom lock to Salcey forest and covers some 1300 acres.

The earliest written records we have of the village come from the Domesday book where the village is described as Asce or Aceshille. The ash tree was held in veneration by the Saxons and there is little doubt that this was the origin of the name of the village. Our village history shows we seem to have had continuous habitation here since the Roman times and even earlier and has had links with Royalty (associated with the Grafton Estate) from Henry VIII through to Charles II.

Our quiet village is tucked between the trees and in the folds of the hills, is south west facing and usually quiet, other than when the London – Birmingham express train rushes through the village. The railway line on its embankment (north – south) cuts the village in two. The eastern and smaller part of the village known locally as ‘Little Ashton’.

Most of the residents work in the local towns and villages, with some commuting to London & Birmingham, though in recent years some are becoming ‘home based’ in the village. We have a thriving local primary School, Church and pub, the Old Crown Inn.